Both of these models are great choices for beginners. They both offer excellent value for money, and they both come with a 2-year warranty.

However, there are some differences between them that you might want to consider before buying.

They are indoor speakers, though, so we only recommend them for indoor use rather than any outdoor uses you may have been planning for them. 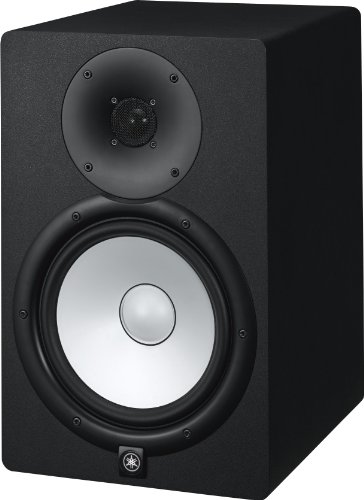 These Yamaha HS8 studio monitors are the best value for money. They bring accurate sound quality to any room. Their 8-inch woofer provides a great bass response, while the 1-inch tweeter gives clear highs.

You get 120 watts in total. This makes them the ideal choice for recording and mixing music. You don’t need to buy a subwoofer with the HS8 speakers, because the 8″ woofer already gives you enough bass to make your music sounds great.

A Yamaha HS8 powered studio monitor is a high-quality speaker system that provides more than enough power to be heard loud and clear.

It is a great choice if you want to hear everything in your songs. The speaker system offers a wide frequency range of 38Hz to 30kHz, making it perfect for mixing and recording.

The speaker system includes a woofer and a tweeter, both mounted inside a cabinet.

These types of speakers are commonly found in professional studios because they may be too much for small bedrooms producers to use, they cannot be used for casual listening or home use. Speakers are bi-amped powered studio monitors.

Their crossover frequency is 2kHz. Their transducers are LF 8″ cone and HF 1″ dome, and their input sensitivity is 10dBu/10k Ohms.

Their total output power is 120 Watts. This speaker is very powerful, but it’s also very light. You can carry it around easily. And you can use it anywhere because it doesn’t need any power source. 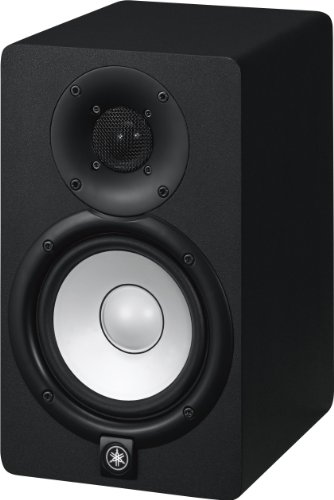 Yamaha HS5s are great entry-level monitors. They offer a lot of features for the price. You get a crystal clear sound and a good amount of bass.

They also have a built-in room correction system. The Yamaha HS5 Monitors are the best choice for beginner musicians.

Yamaha HS5 monitors are very useful for recording music because they are compact and easy to use. They do not produce much bass, but they give a great sound quality.

The frequency range is 54 Hz – 30 kHz, and they are mostly used for casual listening or by bedroom musicians. A speaker type with a bass reflex enclosure, powered by two amplifiers.

It is analog input sensitive to 10dBu and the crossover frequency is 2Khz. The speaker is a great choice for those who want a compact yet powerful speaker system.

The HS5 monitors are actually the smallest-sized monitors in this series. They will fit into any sized room or studio room.

These speakers give just the right volume for those who are beginning their mixing or producing journey. The HS8 speakers have more power overall when it narrows down to bass and frequencies.

While you still receive similar features, these speakers feature an increasingly low-frequency clarity as well as the sound quality being much more accurate as well.

The HS5 monitors have a wider frequency range than the Yamaha HS8 speakers. This means that the HS5 speakers will give you a clearer sound quality.

Both speakers have similar ranges, but the HS5 speakers have a higher frequency range. The HS8 monitor offers great sound quality but lacks low-end. With the Yamaha HS7 monitor, you’ll get more bass and mid-range.

I’m going to buy an HS5 because it’s cheaper and lighter. The HS5 is the best choice for in-depth listeners, but if you want a great-sounding headphone, then go for the HS8.

The HS8 actually has a more professional sound quality overall and is the upgraded version of the HS5, so they come from the same family of products.

A great choice for casual listening to music or watching movies. This speaker is smaller than the previous models. But it still sounds great!

They’re both high-quality speakers at a low price. These are the smallest units in the HS series but, still, have a large sound stage.

The HS5 is a single-unit woofer that has a great stereo input and is mountable.

A cone woofer measures 5″ and the dome tweeter is 1″. These two parts create a smooth response over different sound frequency ranges.

The HS8 is also a single unit, mountable, and has a stereo output that measures 16×14.25×21 inches and weighs 29.1 lbs. The HS8 has screws and mounting points for easy installation. Baton brackets are sold separately.

Yamaha HS8 speakers have a 2-way design. They have a dedicated amplifier for each speaker, ensuring a high-quality sound.

There are two response controls, the High Trim and Room Control. These features will be helpful if you want to adjust the sound depending on where it is located or if your monitor needs to be placed next to a wall.

The HS series has a newly constructed enclosure using a resilient MDF. The monitor has advanced noise reduction technology.

The Yamaha HS8 has an 8-inch subwoofer and a tweeter. This is powerful enough to produce an entire studio.

You do not need to purchase another subwoofer. To summarize, the HS8 has all the features of the HS5 but is more upgraded in audio quality.

The HS8 is a lot heavier than the HS5. The HS5 produces much less sound power than the HS8. For most people, the HS5 is enough for basic audio production.

A speaker with a higher frequency range produces more powerful bass notes. The HS5 has less bass output than the HS8. This is a great microphone for recording vocals.

Yamaha HS5 (image) is the smallest unit in Yamaha’s HS Series. It’s a single-unit woofer that’s mountable and comes with stereo output. The prices range depending on where the speaker is purchased from.

The HS8 is the clear choice for any audio enthusiast. It is more flexible than other speakers and can be used both at home and in a professional environment. It also sounds better than most speakers costing twice as much.

Both products are very similar, but the Yamaha HS8 monitor wins because it works with 100-240 volts.

We have a rundown of the winner overall by comparison:

You should choose the product that will be most suitable for your project. Read our full article above on which would be the best choice for your purposes.

We hope our Yamaha HS5 vs HS8 comparison helped you make a better choice. Share this comparison with your family, friends, and colleagues.

And with your new knowledge from learning everything, there is to know about these two speakers, you’ll be able to recommend the best speaker for your friends and family. Both are fantastic, but which did you prefer?

Jacob Stable
Hi, I’m Jacob Stable and I am a self-proclaimed music lover. It all started when I was eight years old, desperately looking for something to drown out the outside world. That is when my uncle introduced me to his favorite bands on vinyl.

Since then, records have been my go to source of tracks. However, I love finding new ways to improve my sound system through top of the line equipment.
Latest posts by Jacob Stable (see all)

We are a participant in the Amazon Services LLC Associates Program, an affiliate advertising program designed to provide a means for us to earn fees by linking to Amazon.com and affiliated sites.