Victrolas tend to be great for playing records, but they don’t last forever. So, are they worth buying?

A Victrola is a type of phonograph player that was originally manufactured by the Victor Talking Machine Company.

The co-founders of the company, Emile Berliner & Eldridge R. Johnson, were the inventors of the gramophone (or, as we’d refer to them now, the disk record and the record player).

But with the advances in technology in the industry over the past few decades, have Victrola record players managed to keep up?

The following article will take a look at the overall quality of the company’s products, as well as everything else you might need to know about Victrola.

There have been huge technological advancements in the music industry over the years.

Not only did CD players become gradually more common than record players, but consumers suddenly gained the ability to download music online and, more recently, to easily stream all the music they want online for just a small monthly fee.

But the rise in CDs and then the rise of streaming didn’t spell the end for record players.

One of the very first names to grace the music industry, Victrola has been manufacturing audio appliances since they were founded back in 1906.

Despite all the aforementioned changes in the audio industry, the company has held fast and is still a widely recognized brand today thanks to its many decades of expertise.

They’re known for their high-quality products, particularly the materials used for their record players.

But there are so many names in the audio industry nowadays, so how do they stack up compared to all the competition?

What Should You Be Looking For In A Record Player?

There is a wide range of products offered by Victrola, so before we can pin their overall quality, it’s important to know what things you should be looking for when it comes to record players.

The tonearm is what directs both the stylus and cartridge to the record, and this component must be made with high-quality materials.

Some Victrola record players offer automated features, meaning you don’t need to lift the tonearm manually when a track comes to an end.

It tends to be that the less you pay for a record player, the lower quality the cartridge is going to be.

If you feel like your record player’s cartridge is of a lower quality than you’re happy with, don’t fret- most of the time you can replace your cartridge with a new one that’s of higher quality.

You’re going to want something that has a thicker, sturdier casing, to minimize vibrations, which can end up worsening the quality of the sound, and even decrease the lifespan of the record player.

Vinyl records can come in more than one size, and the speed settings they require depend on said size.

One of the brands most similar to Victrola is Crosley, a company that offers records players that have many of the same features, and are in the same sort of price range as Victrola units.

Comparing these two brands is a good way to determine the quality of Victrola record players.

Specifically, we’ll be comparing the Victrola VSC-550BT record player and the Crosley CR8017A record player. But first, let’s look at both products individually, and the key features offered by each. 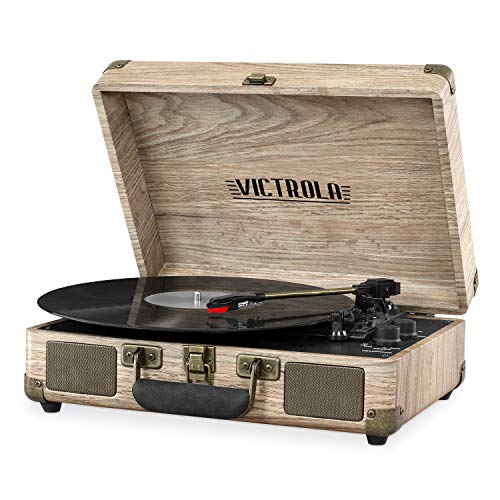 A portable unit, the Victrola VSC-550BT can be easily transported due to its handy suitcase… case. Remarkably there are 39 different options available when it comes to color.

There’s bound to be a style that catches your eye, whether it’s a more traditional color or something a little quirkier like aqua turquoise, United Kingdom flag, tie-dye, retro map, purple glitter, or farmhouse oatmeal.

The VSC-550BT plays records at all three speeds (78, 45, and 33 revolutions per minute), and is completely portable thanks to its suitcase handle.

It has a built-in Bluetooth receiver, a line input for wired devices, RCA output, sound isolation feet, and built-in speakers.

It’s certainly an entry-level unit, but if that’s the kind of thing you’re looking for then you can’t go wrong here.

It features an intuitive interface and features that are very easy to use, even if you don’t have much experience with record players.

It’s also handy that you can use both the wired and wireless devices that you likely own already. 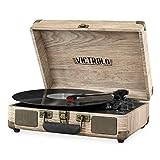 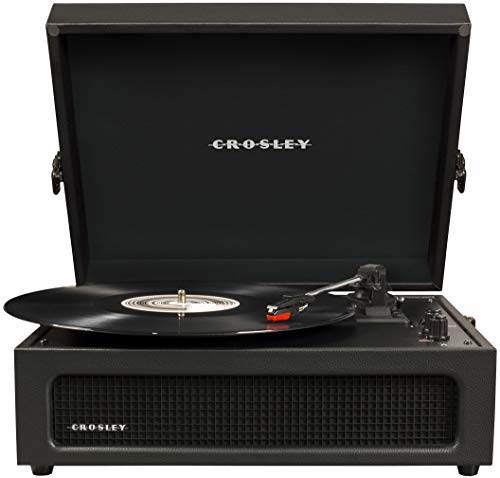 Similarly, portable, the Crosley CR8017A unit comes in a black case and its features are much the same as those offered with the VSC-550BT. Its price is very similar, too.

The CR8017A is designed for use with an existing setup, meaning you won’t have to supply any speakers or other external amplification.

Just like the VSC-550BT, this record player plays vinyl of each of the three sizes (78, 45, and 33 revolutions per minute), and is completely portable thanks to its sturdy case and suitcase-style handle.

It offers a headphone jack, a built-in Bluetooth receiver, and aux input options for your wired devices.

It’s a great record player for playing vinyls when you’re on the go, letting you amplify Bluetooth devices (such as your mobile phone or your tablet) using the internal speakers.

The fact that you can also connect wired devices is handy too, as it means you can amplify music without using dedicated speakers. 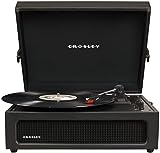 This is the only major difference between the two units, and because they’re both very similar in price, it does give the VSC-550BT the edge over the CR8017A, even if only slightly.

Should You Buy A Victrola?

So, Victrola makes decent record players, particularly in the entry-level market. But should you buy one?

It depends on the unit itself – as we mentioned, there are a lot of Victrola record players on the market, and they tend to differ in quality.

While most Victrola record players tend to play music of a high enough quality for those new to the record player world, some of the cheapest Victrola units simply aren’t going to last you very long.

You might be fine with this depending on how often you’re planning on using the record player, and whether you envision yourself upgrading eventually anyway.

A cheap record player tends to signify cheap materials, meaning they’ll usually be fine for records that are lower quality.

But you wouldn’t want to be playing valuable records on a cheap unit, whether it’s Victrola or any other entry-level brand.

It all depends on which sort of model you’re getting. Most of the time, a Victrola record player that’s cheaper than $100 won’t be very high quality, and may even end up damaging your records after prolonged use.

But that’s not to say all record players produced by Victrola are of this quality.

Their classic units from years ago tend to be made with better materials, as do their most expensive modern units that are being produced today. These types of models are unlikely to damage your records.

At the end of the day, for a lot of people a cheap, entry-level record player is going to suit just fine.

But just because you’ve settled on spending less doesn’t mean you should be buying the first entry-level unit you lay your eyes on.

Compare its features with those of other cheap units (only cheap units, though- don’t compare them to high-end units, as those will naturally offer far more).

So, how do Victrola record players stack up? The answer differs depending on your budget.

If you’re looking for an entry-level record player and don’t mind that the sound quality won’t be as good as that of high-end units (and are unlikely to last anywhere near as long), then a cheaper Victrola record player should suit you fine, especially compared to other brands offering the same prices.

However, if you want a high-quality record player, you’re going to be paying quite a bit more, either for a traditional, older Victrola or for one of their pricier modern units.

Some of their models are just as good as some of the high-end names on the market; it just requires a little research.

Jacob Stable
Hi, I’m Jacob Stable and I am a self-proclaimed music lover. It all started when I was eight years old, desperately looking for something to drown out the outside world. That is when my uncle introduced me to his favorite bands on vinyl.

Since then, records have been my go to source of tracks. However, I love finding new ways to improve my sound system through top of the line equipment.
Latest posts by Jacob Stable (see all)

We are a participant in the Amazon Services LLC Associates Program, an affiliate advertising program designed to provide a means for us to earn fees by linking to Amazon.com and affiliated sites.